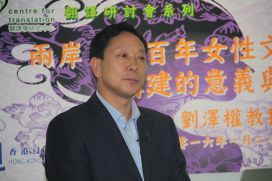 The larger part of the twentieth century ever since 1919 has seen Chinese female translators not only growing larger in number, but also playing an ever-increasing role in the field of literary translation. This observation is especially true of the cases of Taiwan and Hong Kong, where women translators are contributing what male translators seem to have failed to in a “male dominant” society. Across the Strait, a group of ever-young female intelligentsia have been working indefatigably, both as professors and as translators. Nancy Ing (1920-) and Pang-yuan Chi (1924-), for example, have been devoting themselves to the introduction of Taiwan literary works into the English world, primarily but not exclusively by means of The Chinese Pen: Contemporary Chinese Literature from Taiwan, a quarterly journal launched since 1972. In Hong Kong, Martha Cheung (1953-2013), Jane Lai and Eva Hung have not only been “spearheading translation from Chinese into English” (South China Morning Post), especially through Renditions: A Chinese-English Translation Magazine which has been published since 1973. More importantly, they have been reflecting critically on “issues pertaining to traditional and modern Chinese translation through the perspective offered by present-day theories and research methodologies in western translation studies”.

Nevertheless, amidst the ever-emerging studies of Chinese translation history, scant attention has been paid to the many women translators, especially contemporary females in Taiwan and Hong Kong. This situation unfortunately “drowns the vast group of women translators in the long river of history”, which in the long run leaves the historical contribution of women translators in oblivion. Martha Cheung thus seems justified when she succinctly pointed out that, “There have not been studies of women’s translation history in China, despite the fact that the introduction of Western feminism into China at the outset of the new century has spurred studies in women’s translations from this perspective.” This talk will first make a brief review of current studies in the field of women’s translation history, and then illustrate the significance of timely studies in making up this inadequacy. Following a demonstration of the potential methods whereby such studies might proceed, this talk will conclude with some preliminary observations. It is hoped that future studies in this field should serve to trace the history of women’s literary translation of the mainland, Taiwan and Hong Kong in the last century, delineate representative women translators and their translations, and assess their historical and socio-cultural role.

Mr. Liu obtained a Ph.D. in translation studies from the National University of Singapore (NUS) and is now teaching at the School of Foreign Languages as Professor Emeritus (i.e., “The Yellow River Scholar”) at Henan University, Kaifeng, China. He has primary interests in corpus-based translation studies. He has chaired three national projects, including “A Study on the Construction and Application of the Chinese-English Parallel Corpus of Hong Lou Meng (Dream of the Red Mansion)” (2005), “The Compilation of A Corpus-based Chinese-English Cultural Dictionary of Hong Lou Meng” (2010), and “A Critical History of Women’s Literary Translations of the Mainland, Taiwan and Hong Kong (1899-1999)” (2015), and has published widely in both international and domestic journals, such as Meta, Journal of Chinese Linguistics, Translation Quarterly, and Journal of Translation Studies, etc.

A Critical History of Women’s Literary Translations of the Mainland, Taiwan and Hong Kong (1900-2000): Its Significance and Methods
Scroll to top