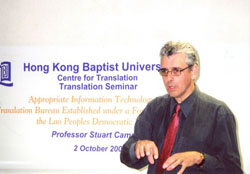 Between 1999 and 2001 the University of Western Sydney was contracted to establish a Translation and Interpreting Unit for the government of the Lao Peoples Democratic Republic. The project was funded by the Australian Agency for International Development, and the head contract was let to Sagric International, a major consulting company. The contract required the university to train the TIU staff in Australia and on the job in Laos, to design and set up the physical resources of the TIU including computer equipment, and to build the capacity of the TIU to operate autonomously after the consultants had left.

As one of the world’s poorest countries, remote from the mainstream of translation practice, Laos posed serious challenges to the project team. The selection and use of appropriate information technology was one such challenge; it was clear from the start that the team could not simply import and impose existing models of practice from the developed world. Instead it was decided to integrate information technology development with professional and organizational development. This part of the project revolved around the production of an Operations and Procedures Manual for the TIU, which became the framework for discussing how the TIU would work, and what information technology solutions were appropriate. The manual was developed iteratively and consultatively by the university consultants and the newly trained TIU staff. Information technology solutions were based on the maximum level of technology that could be sustained in Laos, i.e. Microsoft Word. Excel, Access and Internet Explorer operating on a network of eleven IBM PC’s. The Manual included the design brief for a local software developer, who wrote the TIU’s Workflow Management System in Microsoft Access.

Among the special challenges were:

In dealing with these challenges, the team developed a model which may be applicable to other contexts where translation takes place far from the centers of power and influence, and where information technology has to be tailored to the needs and capacity of the users.

Professor Stuart Campbell is the Head of the School of Languages and Linguistics at the University of Western Sydney, Australia, where he has responsibility for programs in interpreting/translation, modern languages and TESOL. He has researched and published in such areas as translation theory, language planning, assessment, and Arabic linguistics. His special interest in translation studies is the development of translation competence into English as a second language.