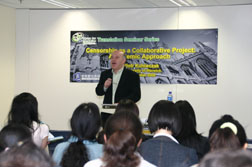 This talk will address specifically the attitude of the censoring institutions to translation as a force that may undermine the interpretation of reality which the oppressive regimes hold as the official one and as the only one the oppressed populations are allowed to accept as true. The long term cases of political censorship should not only help us to understand how censorship functions in a technical sense; they give an opportunity to assess its long-term effects, as well as its often ambiguous impact on the societies where it operates. Looking at such cases we may be in a position to re-examine the common belief that the blame for censorship can be conveniently apportioned to a small group of policy makers and the actual censors. We may also be able to find out whether the lifting of censorship commonly leads to a cultural and intellectual revival, or rather to commercialization and the trivialization of social discourse.

Piotr Kuhiwczak is Associate Professor, co-founder of the Centre for Translation and Comparative Cultural Studies, University of Warwick, England, and an Honorary Professor at Guandong University of Foreign Studies. He is also Chair of the Editorial Board of The Linguist, a journal published by the Chartered Institute of Linguists. He has published extensively in the fields of comparative literature and translation studies in The Cambridge Quarterly, Translation Studies and Forum for Modern Language Studies. His most recent major publication is a co-edited volume A Companion to Translation Studies published in 2007 by Multilingual Matters. His current research project is about the mediating role of translation in autobiographical writing.

Censorship as a Collaborative Project. A Systemic Approach.
Scroll to top