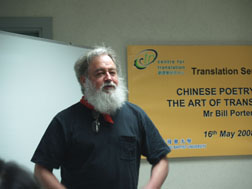 Bill Porter completed his undergraduate studies at the University of California at Santa Barbara with a major in anthropology. He developed an extensive interest in and knowledge of Chinese after he moved to Taiwan in the early 1970s, and started translating poetry including that of Han-shan (Cold Mountain) and various Zen Buddhist writers in the decade that followed. In the early 1990s he moved to Hong Kong and joined the local radio station Metro Broadcast as an Asia Features Editor. He is the translator of such award-winning translations as Guide to Capturing a Plum Blossom , Lao-tzu’s Taoteching and The Collected Songs of Cold Mountain . He also published translations of numerous Buddhist texts, among which include The Zen Works of Stonehouse (Shih-wu), Diamond Sutra , Poems of the Masters, Heart Sutra and Platform Sutra. He is currently working on a translation of the poems of the T’ang-dynasty poet Wei Ying-wu. His latest work, Zen Baggage, a record of a pilgrimage he made in 2006 to sites in China associated with the early history of Zen, is scheduled for publication in the Fall of 2008.

Chinese Poetry and The Art of Translation
Scroll to top