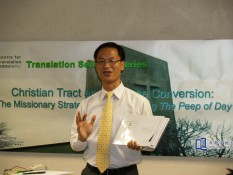 The translation of Christian tracts was given high priority by Protestant missionaries for the conversion of Chinese people in the nineteenth century. In the process of cross-cultural translation, missionaries had to work within the constraints of their own linguistic competence, the specific needs of Chinese audience, and the stipulated agendas of religious institutions. Meanwhile the Chinese collaborators had a covert, but pivotal, part to play in shaping the final products.
Given an enormous corpus of Christian literature, The Peep of Day, a Sunday-school textbook, stood out as one of the most popular tracts to be translated into a great number of Chinese dialects. In this talk, four Chinese versions will be scrutinized in an effort to reconstruct the norms of individual translators. Pioneering attempts will also be made to investigate the contextual factors which determine the selection of text, the strategies of translation, and to assess the role of missionaries as manipulators, through a case study of The Peep of Day being converted into Chinese.

Dr. John Lai is Assistant Professor in Translation at Hong Kong Baptist University. He graduated from the University of Hong Kong in 1997 with a B.A. (first honours) degree, major in translation. Three years later, he obtained an M.Phil. Degree from the same university with his research on the Chinese translations of Bunyan’s Pilgrim’s Progress. The University of Oxford conferred a D.Phil. Degree on him in 2005 for his thesis entitled “The Enterprise of Translating Christian Tracts by Protestant Missionaries in Nineteenth-Century China”. With the support of a Faculty Research Grant from HKBU, he is currently undertaking a research project on institutional patronage and tract translation.

Christian Tract and Chinese Conversion: The Missionary Strategies in Translating The Peep of Day
Scroll to top