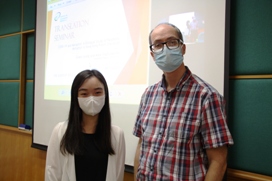 Location: On campus and Online via Zoom

The COVID-19 epidemic has given rise to the publication of a vast number of documents in Hong Kong. A project designed to investigate metaphors about coronavirus as reflected in both English and Chinese texts published in the SAR has been running at HKBU since January 2021. As part of this a total of 44 documents relating to government, scientific research, literary writing and the press have been collated and analysed for their metaphorical content. Of these, it is articles from the press that tend to be richest in terms of both the number and the variety of the metaphorical expressions that they contain. Within certain texts, metaphorical expressions can occur in patterns that reflect an often complex metaphorical modelling of the topic. A great diversity of metaphorical expressions have been identified relating to experiential areas such as war and the military, language, the natural world, containers, racing against time, buildings, crime, the family, journeys and fire. Of these, it is the first three categories that account for the greatest number of metaphorical expressions by far. Writers talk about winning the battle against the disease and going to the front line to meet healthcare staff; the RNA of COVID-19 is presented as a transcript, and the virus is attributed with a proofreading mechanism; and the epidemic is variously described as a tempest and a continuous eruption in the community. At the same time, there seem to be clear differences between the English and Chinese sources in terms of the themes that occur most frequently. Taken together, these expressions bear witness to the way in which writers utilise many different aspects of human experience to talk about this unprecedented assault on our health, safety and way of life.

Grace Leung
Graduating with a BA in Translation, Interpreting and Intercultural Studies, Grace Leung has been Research Assistant at the Centre for Translation, Hong Kong Baptist University since September 2019. Prior to the current project on metaphor studies, she assisted in a University Grants Committee funded project which centred on anthologies of translated Hong Kong Literature. She is currently applying for a research postgraduate degree.

Mark Shuttleworth
Mark Shuttleworth has been involved in translation studies research and teaching since 1993, at the University of Leeds, Imperial College London, University College London and, most recently, Hong Kong Baptist University, where he is a member of the Department of Translation, Interpreting and Intercultural Studies. He has a long-standing interest in metaphor and has published a number of articles on metaphor in translation.