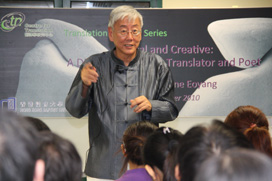 This is an anatomy of the process that led to five translations of Chinese poems written in traditional modes – three jueju, one wuyan lüshi, and one qiyan lüshi — by the poet Wann Ai-jen (poems and translations to appear in the November issue of Renditions: A Chinese-English Translation Magazine). In the give and take between translator and poet, a dialectic of the critical and creative is achieved, with the critical and the creative coming from both quarters. The dialogue shows that, whereas the critical might be regarded as an obstacle to creation, and creation may be seen as antithetical to a critical perspective, there are instances where the two are complementary and co-productive. Sometimes the conflicts were not so much between poet and translator as between fundamental worldviews in the source and target cultures.

Eugene Chen EOYANG is a practicing translator and a theorist of translation – some of his most recent translations appear in Renditions: A Chinese-English Magazine in the May issue and in the November issue (forthcoming). Among his studies of translation theory are The Transparent Eye (1993) and ‘Borrowed Plumage’ (2003). He is Professor Emeritus of Comparative Literature and of East Asian Languages & Cultures at Indiana University, and Professor Emeritus of English, Translation, Humanities, and General Education at Lingnan University.

Critical and Creative: A Dialogue between Translator and Poet
Scroll to top