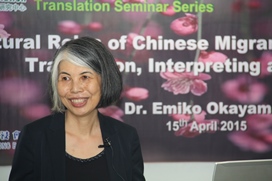 During Japan’s self-imposed isolation (1639-1859), Nagasaki was the country’s only port open for international trade: merchants from two nations, Holland and China, were granted access. While in Nagasaki, the Dutch and Chinese were each confined to their own tightly controlled districts: on Dejima Island 出島 (from 1639) and in Tōjin yashiki 唐人屋敷 (Chinese Quarter, from 1689) respectively. The Chinese enjoyed a larger share of the trade and at its peak over ten thousand Chinese arrived in Nagasaki in one year. In order to maintain order and trade, the Japanese created a special profession, Tōtsūji 唐通事, who were chosen from resident Chinese and whose activities extended beyond translation and interpreting. Most of the hereditary Tōtsūji families in Nagasaki were also migrants who had left China between the end of Ming and beginning of Qing dynasties. This is because in the early years of the Edo period, unlike Christians who were persecuted, movements of Chinese were not strictly controlled until 1689 when the enclosed area of Tōjin yashiki was built.
A political refugee, Shu Shunsui 朱舜水 (Zhu Zhiyu 1600–1682), brought a new strand of Chinese philosophy and had great influence on the formation of Mitogaku 水戸学—a school of Japanese historical and Shinto studies based on Confucian and nationalistic thought that arose in the Mito domain of Japan. A Linji Chan monk, Yingen 隠元隆琦 (Yǐnyuán Lóngqí, 1592-1673), arrived in Nagasaki after repeated requests from prominent resident Chinese. He opened Manpukuji temple in Kyoto and founded the Ōbaku school of Zen Buddhism 黄檗宗 in 1661 sponsored by shogun Tokugawa Ietsuna. Yingen and his successors brought southern Chinese culture. The influence of Ōbaku went far beyond religion: new forms and styles in painting, calligraphy, tea ceremony (煎茶 sencha), pottery, architecture, landscape, etc. spread quickly among the ruling class and wealthy merchants and farmers. The paths of Ming refugees, Ōbaku monks and Tōtsūji were intertwined and influenced the spread and popularity of Chinese culture in Japan. This presentation will explore the role of Chinese migrants and Nagasaki Tōtsūji as mediators between the two cultures (China and Japan) under the condition of controlled national seclusion.

Dr Emiko Okayama is a translator and researcher with special interests in Historical Linguistics, Japanese visual culture and literary history. She has an MA in Translation Studies (DCU) and a PhD in Linguistics (Sydney). She is currently an honorary fellow at the University of Melbourne and a Japan Fellow at the National Library of Australia. Her latest research is on 18th and 19th-century Sino-Japanese cultural exchange that generated literary interactions and adaptations.

Cultural Roles of Chinese Migrants in Edo Japan: Translation, Interpreting and Beyond
Scroll to top