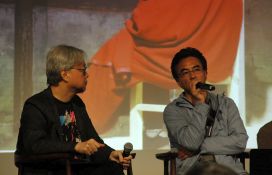 Hong Kong film maker Evans Chan lives between Hong Kong and New York, making films and writing about Hong Kong to an international audience and reader. The inter-lingual, intercultural and inter-medial conditions face by both Evans Chan and Pema Tzeden are representative of contemporary creativity. The HKBU Centre for Translation and The Asia Society are pleased to engage the two distinguished artists in a dialogue sharing with the audience their experience of interlingual, intercultural and inter-medial creativity.

Born of Tibetan descent in the Amdo Tibetan region of Qinghai Province, educated in Qinghai and Beijing. As an auteur in the cinema he has on major international prizes with his films including The Silent Holy Stones and Old Dog. His short stories, some written in Tibetan and others in Chinese, have also captured international attention and been translated into English, French, German, Czech and Japanese. His is also a prolific literary translator of Tibetan literature into Chinese. Pema Tzeden’s films, short stories and literary translations are expressive moments of self-representation of contemporary Tibetan lives. His use of varying media in the context of international reception have allowed his works to develop unique inter-medial and inter-cultural dimensions.

Cultural Translation: Speaking to you about me – Pema Tseden in dialogue with Evans Chan
Scroll to top