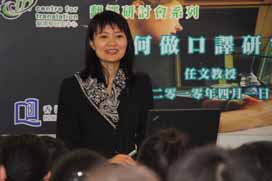 Interpreting research has generally been thought of as being too abstract, brain breaking and boring by interpreting trainees. This is true when compared with interpreting practice, which enables interpreters to make a fortune, meet interesting people, and travel to different parts of the world. But probably we can make things less technical and intimidating by visualizing a research process as a flow chart in which a series of tasks are presented in a sequence: choosing a research topic/developing research questions → defining research purpose→reading literature → selecting research design → collecting data → analyzing data→ finding research result/writing up a thesis/paper. Even if an actual research project does not always take place in this chronological order, interpreting students are suggested to follow the sequence in their initial research work so that they are clearer about when to do what and how. A sample research project will be provided to illustrate how this 7-step strategy can be adopted to help kick off, design and carry out the research work.

Prof. Dr. REN Wen is the vice dean of the College of Foreign Languages and Cultures, Sichuan University. She was a Fulbright scholar at the University of Wisconsin, Madison between 2001 and 2002, and a visiting scholar at Peking University between 2007 and 2008. She is the team leader of English/Chinese Interpreting Course at Sichuan University which has been rated as a national-level Excellence Course by the Ministry of Education since 2008. In 2009 she was invited by the SIM University in Singapore to be the external assessor of the English/Chinese Simultaneous Interpretation courses for its B.A. degree program. In the past few years she has also been the trainer of the Interpreting practice/teaching/research workshops organized by the Chinese Translators Association.
For many years, she has been teaching interpreting at both the undergraduate and graduate levels and has rich consecutive as well as simultaneous interpreting experience. The senior foreign politicians and dignitaries for whom she had interpreted include former Prime Minister of Australia Robert Hawke, former Prime Minister of New Zealand Mike Moore, former UN under Secretary-General Jeffrey Sachs, former USTR Robert Zoellick, former US ambassador to China Joseph Prueher, former Prime Minister of Pakistan Shaukat Aziz, Prime Minister of Sri Lanca Ratnasiri Wickramanayaka, etc. She has been invited to be the judge at the English speaking competitions and English interpreting competitions at the provincial, regional and national levels. She also coached students who won champions at the national English speaking and English interpreting competitions.
Her major areas of research include interpreting studies, translation studies and EFL public speaking. She has published about 30 papers, one monograph, two translated works and 5 textbooks, with two more being compiled.

How to Do Interpreting Research?
Scroll to top