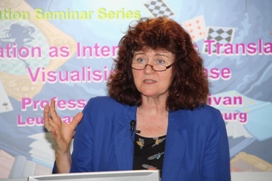 This talk will look at literary illustration as intersemiotic translation, as the “interpretation of verbal signs by means of signs of nonverbal sign systems” (Roman Jakobson). Using as examples illustrations of Lewis Carroll’s Alice in Wonderland, it will ask, amongst other things, how beyond representing scenes and characters, illustrators have “translated” into their own sign system literary elements which have no immediate visual equivalent, such as the verbal nonsense games that characterise Carroll’s novel.