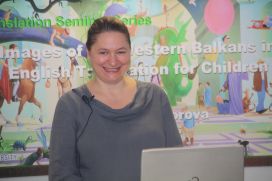 Since the late 1990s there has been an increasing interest in the representation of Balkan culture in the literary works of authors writing in English. Scholars (Bakić-Hayden 1995, Todorova 1997, Goldsworthy 1998, Norris 1999, Hammond 2010) have shown how literary representations of the Balkans have reflected and reinforced its stereotypical construction as Europe’s “dark and untamed Other”. However, the contribution of translated literature in the construction of these images has rarely been considered. Thus, this study of representations of the Western Balkans in translated literature, published since 1990, addresses a gap in the study Balkanist discourses and helps shed a new and more complete light on the literary representations of the Balkans, and the Western Balkans more precisely. Children’s literature has been selected for this study due to its potential to transform and change deeply rooted stereotypes (Sutherland, 1997). This presentation looks at the use of paratexts, and especially the cover (front and back), in the translated books as framing and representation sites that contest or promote stereotypes in the global literary market. English has been selected as a target language due to its global position as а mediating language for the promotion of international literature. However, translations in other languages, where they exist, are also examined for comparative purposes. The study adopts Kress and van Leeuven’s (1996) model of multimodal analysis which will be used to look at three distinct case-studies. The discussion considers how covers changed over time, in different editions of the translated book. It also examines adaptations accompanying the introduction of the translated book into the target society, such as documentaries, music scores and theatre performances.
Bakić-Hayden, Milica. 1995. Nesting Orientalisms: The Case of Former Yugoslavia. Slavic Review, 54.4:917-31.
Goldsworthy, Vesna. 1998. Inventing Ruritania: The Imperialism of the Imagination. London: Yale University Press
Hammond, Andrew. 2010. British Literature and the Balkans: Themes and Contexts. Amsterdam: Rodopi.
Kress, Gunter and Theo van Leeuwen. 2006. Reading Images: The Grammar of Visual Design. Second edition. New York: Routledge.
Norris, David A. 1999. In the Wake of the Balkan Myth. London: Macmillan Press.
Sutherland, Zena. 1997. Children and Books. New York: Longman.
Todorova, Maria N. 1997/2009. Imagining the Balkans. Oxford: Oxford University Press.

Marija Todorova holds a PhD in Translation Studies from the Hong Kong Baptist University and in Peace and Development Studies from Ss Cyril and Methodius University Skopje. She has more than 10 years of experience as interpreter for various international organisations including UNDP, UNHCR, DfID, and OSCE. She is also a literary translator with more than 30 published works in Macedonian and English. For her literary translations Todorova received the 2007 National Best Translation Award in Macedonia, and the 2008 Skopje Book Fair Best Translation Award. In 2014, she was awarded the Anne Frank Prize for her achievements in children’s literature. In 2008 she has established and taught at the Translation Programme of the University American College Skopje. She published two monographs on children’s literature and translation, and her articles appear in refereed publications. Currently, she is an Adjunct Scholar of the HKBU Centre for Translation. Her research interests are interdisciplinary and include interpreters in conflict, children’s and young adult’s literature in translation and visual representation. Todorova is an Executive Council member of IATIS.