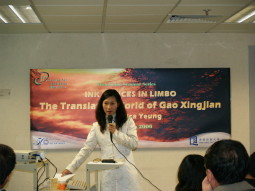 Reading Gao Xingjian’s entire repertoire of writings prompts one to reflect on the relationship between literary production and its context. His works show both advantage and crisis of cross-cultural writing. In the early 1980s he advocated a Modernist style of writing in contemporary China. His works demonstrate the kind of transformations the Modernist writing paradigm has undergone when it negotiated its way into the Chinese literary system, representing an alternative possibility of literary creation. However, to a very large extent, it is this very tension between Modernism and the State-sanctioned Realism that causes his works to be seen as subversive in nature. In Gao’s writings in exile, the absence of the politically oppressive Other caused an immediate loss of co-ordination and direction to his writings, since up until his exile these oppressive Others provided the anchor that positioned his writings. An inward turning of the Other can be seen in his exile writing. It is identified as the “ego” that one cannot get rid of. But this self-subsistent model of self and other cannot be reactive, let alone constructive, in the real sense. Their relevance to their readers is minimal. Worst still, the “self translation” of the writing subject’s experience involved in diasporic writing risks appropriation by Oriental discourses when these writings are mostly received abroad or in translation. Two main issues concerning Gao’s writing, namely his translation of Modernism and writing to be translated, will be the main focus of discussion in this seminar.

Jessica Yeung is Assistant Professor in Translation at Hong Kong Baptist University. She has obtained her B.A. in Translation and M.Phil in Comparative Literature and Cultural Studies from the University of Hong Kong, and her Ph.D. from the School of Fine Arts and Performing Arts Studies of Middlesex University, London. She has recently finished a research on the relationship between translation and Gao Xingjian’s writings with the support of a Faculty Research Grant from Hong Kong Baptist University. She also writes on drama translation, translating xiqu and Audio Description of the arts for the visually impaired.