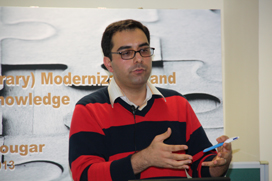 A notion that has long dominated our understanding of the role of translation in (literary) modernization comes from postcolonial theories that emphasize the agency of the translational space (i.e. the third space) in the process of “importing” ideas. The descriptive and analytic limits of post-colonial thoughts are due to their reliance on colonial institutions (e.g. languages, literatures, universities, etc.) which are/were immediately available and advantageous to them. In this light, imagining an a priori role for translation without exploring the impact and function of institutions that participate in the production and transfer of knowledge is untenable particularly because without considering the inevitable epistemological transformations that occur in cross-cultural relations, investigating the role of translation in modernization would be incomplete. As a result, such theories do not shed substantial light on semi-colonized contexts’ (e.g. Iran) experiences of the impact of translation in (literary) modernization.

An example from the asymmetrical relationship of centers and peripheries in World Literature will emphasize the epistemological implications of the institutions of translation. In order to further explore the issue, I will elaborate upon an experiment which was conducted during the 2011-2012 academic year to examine the scientific validity of Area Studies. Inspired by the Sokal case, a computer-generated abstract was submitted under a pseudonym to two major Area Studies conferences held respectively in October 2011 and August 2012. The abstract was accepted to both conferences and described as “theoretically advanced.” After analyzing the experiment to differentiate it from the Sokal case, questions will be raised regarding the impact of institutions not only in the transfer of knowledge but also in its production and legitimization.

Omid Azadibougar holds a PhD in Comparative Literature and Theory from the University of Leuven. His research focuses on the crossroads of literature and translation in intercultural exchange. As of November 2012, he has been a visiting assistant professor at the department of Chinese, Translation and Linguistics at the City University of Hong Kong doing research on Chinese, Brazilian and Persian novelistic traditions.

Institutions of Translation, (Literary) Modernization and the Problem of Knowledge
Scroll to top