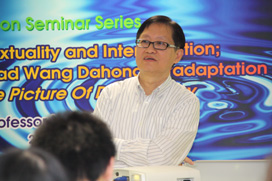 A key mechanism in the process of understanding a text involves the recognition and/or building of connections between the signs within the text and the systems of signs without. It can be said that because of the infinite possibilities for making such connections, a reader can interpret in myriad ways, though always within the parameters set by the text as well as by what Stanley Fish has termed the “interpretive community.” Beginning with the literal meanings – or the dictionary meaning – conveyed by each and every word of the text, the reader can proceed to hierarchically higher levels of textual configuration, utilizing the reading strategies at his disposal and integrating the individual elements into ever-expanding textual realms. In determining the exact significance of the parts, he relates them to various systems – which may be the entire text, systems of other literary texts, and semiotic systems located in the “world out there.”
What happens if these systems are to be completely relocated in an adaptive translation, or as recent theorists would have it, a “tradaptation”? The present paper attempts to study Wang Dahong’s 1977 Chinese translation of Oscar Wilde’s The Picture of Dorian Gray, in which all the references to Victorian culture of the mid-nineteenth century are replaced with those to late twentieth-century Taipei. While following huge chunks of the original text word-for-word, Wang deletes portions that cannot be incorporated into the new Chinese context, and randomly adds elements that he considers relevant to the theme. Yet Du Liankui fails to become thoroughly Sinicized; it becomes immersed in a web of intertextual echoes, revealing to the sensitive reader its inextricable links to two cultures instead of one. The partial recontextualization gives rise to complications when the reader attempts to construct meaning out of the text, one quite distinct from Wilde’s 1891 novel.

Leo Tak-hung CHAN is Professor of Translation and Head of the Department of Translation, Lingnan University. Besides articles in journals like Harvard Journal of Asiatic Studies, Comparative Literature Studies, TTR and The Translator, Professor Chan has published three (Chinese) annotated bibliographies on translated twentieth-century fiction, drama and poetry. His recent scholarly books include: The Discourse on Foxes and Ghosts (University of Hawaii Press, 1998), Masterpieces in Western Translation Theory (co-edited; City University of HK Press, 2000), One into Many: Translation and the Dissemination of Classical Chinese Literature (Rodopi Editions, 2003); Twentieth-Century Chinese Translation Theory: Modes, Issues and Debates (John Benjamins, 2004) and Readers, Reading and Reception of Translated Prose Fiction in Chinese: Novel Encounters (St. Jerome Publishing, 2010). Three co-edited anthologies are forthcoming in 2011: Confluences: Translation Research in Chinese and Asian Contexts, Transformations: New Translation Research in China (in Chinese) and Globalization and Cultural Identity/Translation.

Intertextuality and Interpretation; Or, How To Read Wang Dahong’s Tradaptation of The Picture Of Dorian Gray
Scroll to top