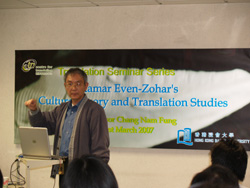 Itamar Even-Zohar has left translation scholars with two hypotheses: that the “normal” position assumed by translated literature in the literary polysystem tends to be a peripheral one, and that translation tends towards acceptability when it is at the periphery. He has not explained the basis of these hypotheses, but the answers may be found in his culture theory.
According to Even-Zohar, social entities are not natural objects. For such an entity to be formed and maintained, a culture repertoire must be invented to enable cohesion within the entity and differentiation from other entities. And from this repertoire certain items, including texts and writers, are chosen as symbols to create a collective identity.
Such symbols have to be indigenously produced or claimed to be so. Translated works can seldom hope to serve as cultural symbols until they have undergone a process of naturalization or their foreign origin has been forgotten. That is why translated literature usually assumes a peripheral position.
Items can be imported to enrich or change a repertoire, but they usually meet with greater resistance than new items that are indigenously produced because they may be interpreted as threats to the collective identity, especially by vested interests. In order to be accepted by a stable and self-sufficient culture, imported items may have to be presented as or at least made compatible with indigenous ones. That is why translation tends towards acceptability when it is at the periphery.

Chang Nam Fung is a professor at the Department of Translation, Lingnan University, Hong Kong. He has translated into Chinese Oscar Wilde’s four comedies, and Jonathan Lynn and Antony Jay’s Yes Prime Minister. His academic works includes Yes Prime Manipulator: How a Chinese Translation of British Political Humour Came into Being, Criticism of Chinese and Western Translation Theories (in Chinese), and a number of journal papers, which have won him the Stephen C. Soong Translation Studies Memorial Award four times. He has a special interest in the theory and practice of polysystem research.