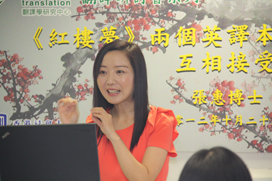 Dr. ZHANG Hui is a Joint-PhD of Peking University and Columbia University in U.S., and a Visiting Scholar of Harvard. She is now Research Assistant Professor of Department of Chinese Language and Literature at Hong Kong Baptist University. She is also a member of the Council of Chinese Nanshe, the Deputy secretary-general of Chinese Nanshe, and a Research Fellow of Research Centre of Chinese Nanshe. Her research interests are on Redology and translated fictions from late Qing to early public China era. Her recent publications include “Mutual Acceptance between American Redology and the Two English Versions about Hong Lou Meng” (The Journal of Chinese Language, Literature and Translation, South Korea, 2011); “An Authentic Interpretation of Baoyu’s Passing the Provincial Examination in the Last Forty Chapters of Hong Lou Meng” (Wuhan University Journal, 2012); “The Modern Value of Chinese Classical Literary Theory: Enlightenment Triggered by Western Sinologists’ Reconsideration of the Structure of Ancient Chinese Fiction” (Journal of Sun Yat-sen University, 2012); “Study on the Original Version of Hu Shih’s Fiction Translation and the Relationship between his Translation and his Research on Hong Lou Meng” (Forthcoming); “Survival in Westernization: The Explanation of the Chinese Allusion Embedded into Translated Fiction in Late Qing Era” (Forthcoming).