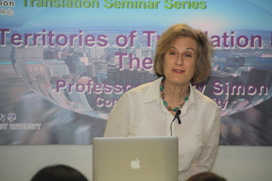 This seminar will explore the ways in which the city has become an object of translation studies – by investigating some of the recent advances in translation theory that expand the field. Work to be discussed, among others, are books by Michael Cronin, Doris Sommer, Emily Apter, Maria Tymoczko, Edwin Gentzler, Vicente Rafael.

Professor Sherry Simon earned her PhD from the Université de Montréal. Her primary expertise is in the field of translation and literature, and is built on a broad understanding of questions of cultural identity. She is Professor in the Département d’Études françaises and held a Canada Research Chair Tier 1 in Translation and Cultural History at Glendon College, York University, in 2005. She has extensive experience in interdisciplinary research, was co-editor of the Quebec cultural review Spirale for ten years and directed the interdisciplinary PhD in Humanities program at Concordia from 1995-2000. Her publications include Fictions de l’identitaire au Québec, [in collaboration], (XYZ, 1989); Le Trafic des langues. Traduction et culture dans la littérature québecoise, (Bordal, 1994); Gender in Translation. Cultural Identity and the Politics of Transmission, (Routledge, 1996), and she also edited Culture in Transit. Translating the Literature of Quebec, (Véhicule, 1995). She is co-editor with Paul St-Pierre of Changing the Terms: Translating in the Postcolonial Era, (Ottawa University Press, 2000). In 2006, her book, Translating Montreal: Episodes in the Life of a Divided City, (McGill-Queen’s University Press) was shortlisted for the Raymond Klibansky Prize, Canadian Federation for the Humanities and won the Mavis Gallant Prize for non-fiction from the Quebec Writers Federation. In 2008, Dr. Simon was elected to the Royal Society of Canada, Academy of Humanities and in March 2009, Dr. Simon was awarded a Killam Research Fellowship.

New Territories of Translation Research: the City
Scroll to top