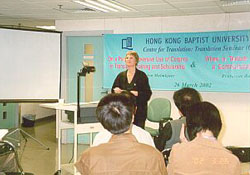 The use in translation studies of methodologies inspired by corpus linguistics has proved to be one of the most important gate-openers to progress in the discipline since Toury’s re-thinking of the concept of equivalence. In this paper, I argue that, the many advantages to be had by this method notwithstanding, there are problems. For example, it is not always obvious which corpus might help a translator solve a specific problem; corpus evidence might be misleading in some cases; and offering past linguistic behaviour as a model for the future flies in the face of the nature of language and may, furthermore, stifle invention. For these reasons, I argue, it is worth exploring ways of using corpora which may seem subversive of standard uses, either alone or in conjunction with more traditional methods of investigation and teaching in Translation Studies.

Kirsten Malmkjar obtained her PhD in Translation Theory in 1984 from the University of Birmingham, UK. She has worked for 10 years at the University of Cambridge, Research Centre for English and Applied Linguistics before moving to a Chair in Translation Studies and Literary Translation at Middlesex University, where she also heads the Centre for Research in Translation, in 1999. Her publications include numerous articles on diverse aspects of translation theory, description and pedagogy as well as Routledge’s Linguistic Encyclopedia (1991/2002), Language and Control in Children’s Literature (co-author Murray Knowles, 1996) and Descriptive Linguistics and Translation Studies: Interface and Difference (1999). She also edited Translation and Language Teaching: Language Teaching and Translation (1998) and Rimbaud’s Rainbow: Papers on Literary Translation (co-editor Peter Bush, 1998). Since 2000 she has been a co-editor of the journal, Target, published by John Benjamins.