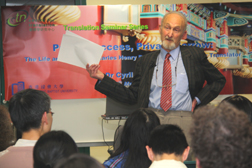 For most of his life Brewitt-Taylor (1857-1938) worked for the Imperial Chinese Customs Service; he also achieved distinction as a Chinese scholar. His masterly translation, The Romance of the Three Kingdoms, was the first of the major traditional Chinese novels to be fully translated into English, the first draft of which being destroyed during the Boxer turmoil. Reference will also be made to his other writings. He lived through a fascinating period of Chinese history, and occupied a number of senior positions in the Customs Service as Commissioner of Customs and first Director of the important Customs College. However, his public success was marked by much personal grief: his beloved first wife died following childbirth, his second wife spent many years in mental asylums, two of his homes in China were destroyed, several babies died, and experienced the loss of both his surviving sons.

Following fifteen years in the printing industry Dr. Cyril Cannon did his undergraduate and doctorate degrees at the London School of Economics. He was founding Head of Department of Humanities and Social Studies at what is now South Bank University, London, before being appointed Deputy Director responsible for academic affairs at the forerunner to Plymouth University. He then worked in Hong Kong for nearly ten years helping to set up the precursor to City University as the member of senior management responsible for academic planning. Following retirement he was appointed Academic Consultant to Lingnan College on its path to university status.