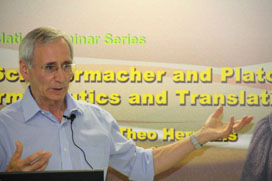 Schleiermacher’s German translation of Plato’s philosophical dialogues, the first five volumes of which appeared between 1805 and 1809, has received little attention from students of translation. Yet it embodies Schleiermacher’s understanding of Plato, which he further elaborated in the introductions he wrote to each of the dialogues and in his general introduction to Plato’s work as a whole. Schleiermacher’s effort to understand and then translate Plato in turn laid the foundation of his hermeneutics, which provides the key to his 1813 Academy lecture ‘On the Different Methods of Translating’ with its famous distinction between ‘foreignising’ and ‘domesticating’ translation.

Theo Hermans is Professor of Dutch and Comparative Literature at University College London. He is editor of The Manipulation of Literature (1985), Crosscultural Transgressions (2002) and Translating Others (2005), and series editor of ‘Translation Theories Explored’ (St Jerome Publishing, Manchester). His monographs include The Structure of Modernist Poetry (1982), Translation in Systems (1999) and The Conference of the Tongues (2007). His main research interests are in theories and histories of translation.

Schleiermacher and Plato, Hermeneutics and Translation
Scroll to top