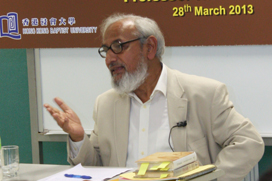 The first non-European and Asian writer to win the Nobel Prize for Literature was the Indian poet Rabindranath Tagore; he is still the only Indian to win the prize and one of under half a dozen writers from Asia. Though the prize is awarded not for a single book but for a body of work, Tagore won it apparently for just one slim book of poems published in his own English translation under the non-translated title Gitanjali (A Handful of Offerings of Songs; 1912).

In this lecture, I examine this highly exceptional occurrence in the history of literary translation with particular focus on the following issues.

(a) Self-translations: their motives, nature and efficacy, especially with reference to bilingualism. Gitanjali remains probably the only work of self-translation to be awarded the Nobel Prize.

(b) Self-translation, Re-writing, and Editing. What are the special virtues and limitations of self-translators? How is the picture altered when some (invisible) editing takes place to ‘improve’ the translation, as for example by W. B. Yeats in the present case?

(c) Translation and Paratexts. D translations including especially self-translations require a paratext such as an explicatory and enthusiastic ‘Introduction’ to be able to make any impact? What is the role of such an ‘Introduction’ (such as the one by Yeats in the present case)?

(d) Self-Translations and Other Translations. How do self-translations compare with translations by others, including native speakers of the TL, as in this case by William Radice (2011)?

In conclusion, as the proof of the pudding, I shall compare three versions of the same poem from Gitanjali, the first a self-translation by Tagore, the second this translation as silently edited by Yeats, and the third a new translation by Radice.

Harish Trivedi is former Professor of English at the University of Delhi, and has been visiting professor at the universities of Chicago and London and at various other universities in the USA, Canada, the UK, Europe, China, Japan and Australia. He is the author of Colonial Transactions: English Literature and India (Calcutta 1993; Manchester 1995; Delhi 2013), and has co-edited The Nation across the World: Postcolonial Literary Representations (New Delhi 2007; New York 2008), Literature and Nation: Britain and India 1800-1990 (London 2000), Post-colonial Translation: Theory and Practice (London 1999), and Interrogating Post-colonialism: Theory, Text and Context (Shimla 1996; rpt. 2000, 2006, 2013).

He has edited with an introduction and notes Hardy’s Tess (Oxford University Press, 1988; several reprints) and Kipling’s Kim (Penguin Classics 2011). He is currently editing an anthology of Indian Literature from 1500 B.C. to 2000 A.D., and is one of the co-ordinators of an international project based in Stockholm for writing a history of World Literature. He is Chairperson of the Indian Association for Commonwealth Literature and Language Studies (2005– ) and Vice-President of the Comparative Literature Association of India (2007– ).

Self-Translation and the Nobel Prize: 100 years of Tagore’s Gitanjali
Scroll to top