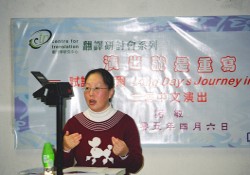 In Brenda Murphy’s O’Neill: Long Day’s Journey into Night (2001, Cambridge U. Press), a monograph on the production history of the masterpiece, there is only one sentence – out of 161 pages of main text – about a performance in China: “In China, a centenary year Long Day’s Journey was produced in 1988 at the Qian Xian Drama Theatre in Nanjing, directed by Zhang Fucheng, with Wang Ping as Mary” (p.124, 1988 is the centenary of O’Neill’s birth). Even within this sentence, there are two mistakes: (a) Qianxian is the name of the company that put on the play, not the place, and (b) the director’s name is Fuchen, not Fucheng. Murphy’s statement highlights the lack of in-depth study on the staging of O’Neill’s play in China. This topic, as shown in the present paper, benefits greatly from theories of Translation Studies, since the three performances of Long Day’s Journey in 1988, 1994 and 1995 demonstrate the influences of the target polysystem on the directors’ decision to stage the play and the norms constraining the production. Essential to this paper is Lefevere’s Translation, Rewriting, and the Manipulation of Literary Fame (1992), which explains in detail the concepts of “rewriting” and “manipulation”, and explores how translation is affected by four important factors, namely “ideology”, “poetics”, “patronage” and “professionals”. By looking at these factors from a causal perspective (Chesterman 1998 and 2000), this paper expounds a model of analysis that focuses on stage performances as rewrites of translations of a play.

Nuo Min graduated from the Central University of Nationalities (Zhongyang Minzu Daxue) in Beijing and started teaching there in 1994. She completed her M.Phil. studies at the Hong Kong Baptist University in 2001, submitting a thesis on the stage productions of Long Day’s Journey into Night in China. Her research interests include film and drama, applied linguistics and translation studies.

Stage Production as a Rewrite: A Study of Three Chinese Performances of O’Neill’s Long Day’s Journey into Night
Scroll to top