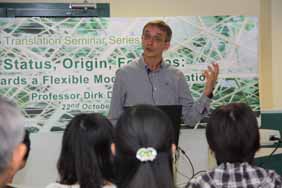 I shall present a simple, flexible and highly relativistic approach to the vexed question in Translation Studies of how to define and circumscribe ‘translation’. My main argument is that in our scholarly models we have to make a radical distinction between three dimensions of texts and discourses: their status (what a text is claimed or believed to be in a given cultural community), their origin (the real history of the text’s genesis, as revealed by a diachronically oriented reconstruction) and their features (as revealed by a synchronic analysis, possibly involving comparisons). These three dimensions tend to be collapsed in static definitions which determine if a label such as ‘translation’ may ‘legitimately’ be attributed to a text on the basis of its origins and its textual features. But in different cultural contexts ‘status’, ‘origin’ and ‘features’ will be made to interlock in quite different ways, and that is what makes it necessary to construe these three levels as forming discrete continua. Many examples – ranging from Shakespeare translations to the experience of taking the train in a multilingual country such as Belgium – will be offered to explain the three levels and the variable relationships between them. Quite importantly, this model enables and encourages us to take the ‘international turn’ in Translations Studies. It also forces us to take a radically fresh look at the relations between Translation Studies and its various neighbouring disciplines.

Dirk Delabastita is professor of English literature and literary theory at the FUNDP Namur (University of Namur, soon to be integrated into the Université Catholique de Louvain). He wrote his PhD on Shakespeare’s wordplay in Hamlet and the problems of translating it (There’s a Double Tongue, 1990, published in 1993). He edited two further volumes on the translation of wordplay: Wordplay and Translation (1996, special issue of The Translator) and Traductio. Essays on Punning and Translation (1997). Dirk Delabastita also co-authored a Dutch-language dictionary of literary terms (Lexicon van Literaire Termen, with Hendrik van Gorp and Rita Ghesquiere, seventh edition, 2007), which has been translated into French (Dictionnaire des termes littéraires, 2001) and of which a new free online edition is being planned for 2011. His other books include European Shakespeares (edited with Lieven D’hulst, 1993), Fictionalizing Translation and Multilingualism (special issue of Linguistica Antverpiensia, edited with Rainier Grutman, 2005) and Shakespeare and European Politics (edited with Jozef de Vos and Paul Franssen, 2008). He is one of the series editors of Approaches to Translation Studies (Rodopi), is involved in the CETRA Translation Studies PhD School at K.U. Leuven, and belongs to the editorial board of The Translator. His main research interests include literary studies and its interface with linguistics and translation studies; narratology; wordplay, ambiguity and verbal humour; the translation and international reception of Shakespeare.

Status, Origin, Features: Towards a Flexible Model of Translation
Scroll to top