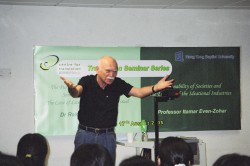 It is argued that the various activities involved with the making of ideas and images for the management of human life are crucial for the production of energy in any society, especially in periods of instability. This energy makes it often possible to allow societies not only sustain themselves over time, or survive, but also successfully compete on an inter-societal level, which basically can be considered to be “success”. The role of the ideational laborers, as individual agencies, assuming different titles/personae in different historical contexts, such as thinkers, idea-makers, intellectuals, poets, artists, can be shown to have been a major force since antiquity. It has become even more visible since the tools appropriated by the ideational industries have become more tangible, but at the same time it is no longer certain that in the current state of affairs it is the established industries, such as literature or “the arts”, that still are the center of the leading forces. If analyzed from the point of view of heterogeneity theories, the powerful forces that create options for life management may hide in spaces still not visible to researchers who normally look only at the conspicuous institutions.

Itamar Even-Zohar, born in Tel Aviv 1939, is Professor of Culture Research and Porter Chair Professor of Semiotics at Tel Aviv University, where he has functioned since 1995 as Chairperson of the new Unit for Culture Research. His research in recent years has been clustering around initiatives of change for the management of social and personal life, and their relations to the sustainability of societies. Such initiatives are taken by “idea-makers” and often implemented by “cultural entrepreneurs”. Therefore, “intellectual labor”, or “the industry of ideas”, which also includes the industries of the production of life images (such as literature), is a central component in the array of discernible parameters relevant to the bundle of questions involved with this research. Conceptually, this work is based on concepts of heterogeneity (or complexity), partly developed earlier by Even-Zohar under the name of “Polysystem theory”. In earlier stages of his work he also contributed to the study of translation as a complex and dynamic activity governed by system relations rather than by a-priori fixed parameters of comparative language capabilities. This has subsequently led to studies on literary interference, eventually analyzed in terms of intercultural relations.

His major collections of works thus far are: Papers in Historical Poetics (Tel Aviv, 1978), and Polysystem Studies (Durham: Duke UP; =Poetics Today 11:1), 1990. A new collection of papers, Papers in Culture Research will include his papers since 1993. (All three collections are available from Even-Zohar’s Website.)

Full bio-bibliographical details and publications are available from his Website:
http://www.even-zohar.com