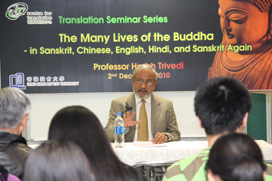 The foundational narrative of the life and deeds of the Buddha (c. 557- 483 BC) is the Sanskrit epic Buddhacharitam by Ashvaghosha (1st century AD). As part of the great enterprise of translating Buddhist texts from Sanskrit, this work too was translated into Chinese as Fo-Sho-Hing-Tsan-King by Dharmaraksha (420 AD). This was followed by a translation from Sanskrit into Tibetan probably in the eighth century.
Both the Chinese and the Sanskrit versions were included separately (in 1883 and 1894 respectively) in Max Mueller’s monumental 19th century series of translations into English in 50 volumes, the Sacred Books of the East. This duplication came about because the Sanskrit original had meanwhile been lost and subsequently, only the first half of the text was found, while the Chinese translation preserved the whole text. (This may seem to constitute an empirical demonstration of Derrida’s theoretical formulation that the original begs to be translated and is not complete without it.)
Already in 1879, the Sanskrit epic had formed a major source for a long poem, The Light of Asia by Sir Edwin Arnold, which was in its 50th reprint by 1889 and was translated into Hindi by Ramachandra Shukla in 1922. In 1936, E. H. Johnston translated the whole of the Sanskrit epic into English, reconstructing the missing second half through a collation of the freer Chinese version with the closer Tibetan version. This composite English version was in turn translated into Hindi (1942, 1944), and this has recently inspired a pious enthusiast in India to compose afresh, or translate back, in Sanskrit verse the missing second half of the epic (2002), with the explicitly stated objective of finally bringing this wandering text home.
In this paper, I track this text through its successive reincarnations in many lands and languages over the last two thousand years, a journey which seems to have ended where it began, in Sanskrit in India, and thus represents a circularity of circulation. I then seek to address some issues relating to the history of cultural contacts between India and China as well as between India and the West. Besides, I discuss the formation of the canon of Indian literature in ancient India, its Western Orientalist reconstitution in the 19th century, and eventually its postcolonial Indian recovery and restitution. I also glance at the appropriation of Buddhism in China, and the even greater appropriation of Buddhism in India. For while Buddhism flourishes as a distinct and attractive religion in many parts of the world, it has been almost wholly absorbed back into Hinduism in its land of origin and has thus been ‘translated’ back — like the Buddhacharitam.

Harish Trivedi, Professor of English at the University of Delhi, has been visiting professor at the universities of Chicago and London, and was the CETRA Chair Professor of Translation Studies for 2006. He has translated into English a wide range of poetry and short fiction from Hindi, and a literary biography, Premchand: A Life (1982; reprint Oxford U.P., 1991). He has co-edited Post-colonial Translation: Theory and Practice (with Susan Bassnett, Routledge London, 1999) and a special issue of Wasafiri with ‘Focus on Translation’ (with Theo Hermans, Winter 2003).
He has published several essays and encyclopedia articles on various aspects of translation in India, which he plans to collect in a volume under the title, ‘Translation in India: India in Translation.’ He is currently editing an anthology of Indian Literature in English Translation, 1500 B.C. to 2000 A.D.

The Many Lives of the Buddha – in Sanskrit, Chinese, English, Hindi, and Sanskrit Again
Scroll to top