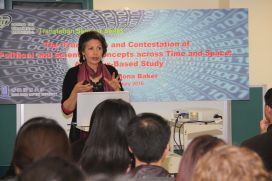 This seminar will report on a large, interdisciplinary research project based at the University of Manchester in the UK and funded by the Arts and Humanities Research Council. The project involves compiling large electronic corpora of ancient Greek, medieval Arabic, early Latin and Modern English to examine how central concepts in the humanities and sciences have been (re)translated into these three lingua francas, and how they have been interpreted and reinterpreted as they entered new cultural and temporal spaces.
The focus of the study is on key historical moments that have brought about transformations in the interpretation of two sets of concepts, the first relating to the body politic (democracy, polis, polity, citizenship, nation, state, natural law, human rights, equality, etc.) and the second to scientific, expert knowledge (experiment, observation, evidence, proof, episteme, truth, falsehood, causation, validity, expertise). These are all key cultural concepts with a long history that remain central to social and political life today. The project also examines the ways and means by which civil society actors involved in radical democratic groups and counter-hegemonic globalisation movements contest and redefine the meaning of such cultural concepts today. In response to state-centred forms of democratic praxis, for example, civil society actors are shifting towards a non-state model of democracy based on principles of diversity and horizontality. In this fluid context, the concepts that have traditionally underpinned scientific discourse (such as evidence and truth) are becoming less central to the construction and dissemination of knowledge, which is now regarded as partial and provisional.
The presentation will engage with some of the ways in which corpus-based heuristic techniques will enable researchers involved in the project to analyse and map the historical transformation of concepts across time and cultural and linguistic spaces, as well as the ongoing processes of knowledge renegotiation involving these concepts in the 21st century. It will further highlight some of the technical and methodological challenges involved in examining corpora of this scale, and incorporating three scripts: Greek, Arabic and Latin.

Mona Baker is Emeritus Professor of Translation Studies at the Centre for Translation and Intercultural Studies, University of Manchester, UK, Principal Investigator on the AHRC-funded project Genealogies of Knowledge: The Evolution and Contestation of Concepts across Time and Space, and co-editor, with Luis Pérez-González and Bolette Blaagaard of the Routledge series Critical Perspectives on Citizen Media. She is author of In Other Words: A Coursebook on Translation (1992/2011) and Translation and Conflict: A Narrative Account (2006), Editor of Translating Dissent: Voices from and with the Egyptian Revolution (2016), the Routledge Encyclopedia of Translation Studies (1998/2001/2009); Critical Concepts: Translation Studies (4 volumes 2009); and Critical Readings in Translation Studies (2010). Her articles have appeared in a wide range of international journals, including Social Movement Studies, Critical Studies on Terrorism, The Translator and Target. She is founding Editor of The Translator (1995-2013), former Editorial Director of St. Jerome Publishing (1995-2013), and founding Vice-President of the International Association for Translation & Intercultural Studies (2004-2015).

The Translation and Contestation of Political and Scientific Concepts across Time and Space: A Corpus-Based Study
Scroll to top