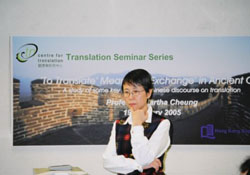 This paper analyzes several terms used in ancient China to refer to the activity/activities now called ‘fanyi‘ in Chinese, or ‘translation’ in English. By tracing the pattern behind the semantic and ideological jogging amongst these terms, the paper offers a new interpretation of the earliest Chinese attempts to define translation (‘fanyi‘). The purpose is to highlight the constructed nature of the prevailing notion of ‘fanyi‘ and unsettle its established meaning, the better to provoke theoretical discussions on and about ‘fanyi‘. The final purpose is to provide a response to the recent call for a non-Eurocentric, international translation studies by advocating for a concerted effort to study the conceptualisations of ‘translation’ as they evolved in different cultures, with the view to eventually developing a general theory of translation that truly has general relevance.

‘To Translate’ Means ‘to Exchange’ in Ancient China? A Study of Some Key Terms in Chinese Discourse on Translation
Scroll to top