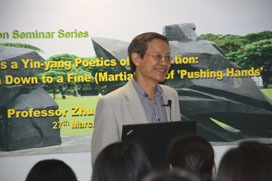 This seminar will begin with a few minutes of live Tai Chi demonstration to the accompaniment of a strain of non-Chinese music, to illustrate how the flow of energy enables a ‘stigmergy’ among the faculties of a human body, both physical and spiritual, to bring about a kinaesthetic experience of articulation in a yin-yang response to the rhythm of the music. The audience will then be invited to mentally translate the lyrics of an English song into Chinese and, through the translation, to feel for, as it were, the information flow that is maintained by the syntax and enhanced by the melody. This inter-semiotic prelude will lead to a presentation on a yin-yang epistemology of translation, which is based on my (2008) plenary speech at the 2nd HCLS Conference on Translation, Language Contact and Multilingual Communication under a similar title. From this yin-yang perspective, translation can be seen as a reciprocal verbal articulation in which one is expected to ‘give up’ one’s presuppositions in order to achieve a maximum degree of relaxation, agility, and vigilance in one’s use of language so as to ‘listen’ (tingjing, ‘listen to the energy flow’) and respond to an advancing flow of energy from the source text, as in the budiu buding (‘neither separating nor confronting’) engagement in Tai Chi pushing hands. Such responsive ‘listening’ and adhering to each other keeps a dialogic rather than confrontational interaction between the two systems involved. Translation perceived as such, it argues, serves to sharpen a culture’s sensitivity about its own and the Other’s presence and to develop its capacity for accommodating, containing, absorbing and deflecting the momentum of the energy from the Other in the creation of a target text.

Towards a Yin-yang Poetics of Translation: Getting Translation Down to a Fine (Martial) Art of ‘Pushing Hands’
Scroll to top