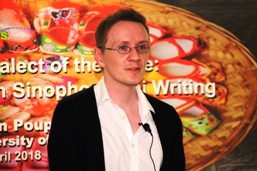 How can minority writers within China assert their own linguistic individualism whilst also writing in Chinese? Ethnic minority works which deal with local culture, including customs, rituals and traditional legends, can generally be divided into two groups: writing in standard Chinese, and works that are composed in native scripts. Most ethnic minority writing that can go beyond the local level to connect with a national or even global audience is published in Chinese – hence the label Sinophone writing.
The subject of this seminar, the Bai people, are one such minority nationality within China, who live in and around the city of Dali in ethnically-diverse Yunnan Province. The Bai have their own language, sometimes classed as belonging to the Yi branch of Tibeto-Burman, and have been living in the region for thousands of years. Nevertheless, they are often cited as one of the most ‘Sinicised’ of China’s ethnic groups. This means that the Bai are caught between two linguistic and cultural worlds: somewhere between Sinitic and Lolo-Burmese, a situation that is reflected in their writing. As they write in Chinese, they inevitably translate their own language and culture, inserting non-Chinese words and cultural context into the Chinese text. In this case, their native language is the ‘source’ language that is self-translated.
This seminar investigates how Sinophone Bai authors use Chinese to reflect their own identity, employing translation to challenge a homogenized notion of ‘Chineseness’ in their writing. They do this by inserting Bai language into Chinese writing via various transformational strategies, such as glossing and the use of untranslated words, making Sinophone minority writers authors of translational texts and cultural translators in their own right.

Duncan Poupard is Assistant Professor in the Department of Translation at the Chinese University of Hong Kong. His work focuses on the translations of Chinese ethnic minority texts, particularly those of the Naxi minority, and he has worked with museums and research groups around the world, including the British Library and the Barcelona Museum of World Cultures. His academic articles have appeared in journals such as Neohelicon and the Journal of Modern Literature in Chinese.

Translating the Dialect of the Tribe: Language and Identity in Sinophone Bai Writing
Scroll to top