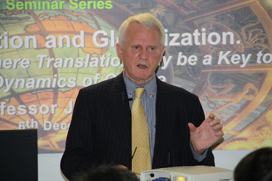 This lecture focuses on fundamental and fast GLOBAL(izing) changes;
In fact most academic guest lectures are an illustration of mobility (in – scholarly – communication). (Cf. Ong 1982.)
In the present case: (a) intercontinental contacts/exchanges (are in fast progress); (b) the focus is on (global and other) Communication
Globalization: just an idea/buzz word? Or is it real? (Or rather: an economic strategy on behalf of (colonial) partners?
Counterchecking…. Is Internationalization (Globalization) really a 20th (and 21st) Century phenomenon? – How and why contemporary translation(s) both reflect and support globalizing trends.
Particular position of translation and Translation Studies (TS)
(Under the waterline: why translation always refers to more than translation)
TS is indebted to Globalization, and vice versa:
1° as an instrument (a service?);
2° as a discipline created by Internationalization?
3° are universities aware of the strategic/symptomatic value of translation(s)/linguae francae?
New challenges, resources, responsibilities in TS
Splendid new equipment(s) (and theories, goals, tools, programs)
Are we really well prepared? (human resources, structures, scholarly communities…)?
The privileged position of networks/peripheral countries/communities (Cf. Lambert 1995)
Multilingualism, translation in transit/mobile communities
Samples and Discussion of innovative approaches
The book market (and the languages of translation);
Media and/as communication (…TV…the Internet)…and other “global” problems: legislation…religion… scholarship, etc.
Methodological models: the Bourdieu team(s); K.Van Bragt, Covadonga Fouces Gonzalez
Interdisciplinarity:
How and why institutions and institutionalization may be a handicap
There is no way back:
Why it would be disastrous to reduce translation to language issues/departments

José Lambert is a professor and scholar in Comparative Literature and Translation Studies from KU Leuven, Belgium (1972-2006). His international career started around 1975. He is the founder of CETRA (Centre for Translation Studies: 1989- ) at Leuven, where some 500 young scholars from 5 Continents have been trained; many among them belong to the new generation of talented researchers in the field. Lambert is also the co-founder and he was the co-editor of Target (John Benjamins, 1989-2010), together with Gideon Toury. He is well-known also as the author of more than 100 articles where Literary Studies as well as Translation Studies have always been approached from a methodological and from an interdisciplinary perspective. It has often been stressed, even by the team around Pierre Bourdieu (Actes de la Recherche en Sciences sociales, Paris, Sept. 2002) that Literature and Translation (Leuven, Acco: 1978), which he edited with James Holmes and Raymond van den Broeck, was one of the key moments of the new discipline that was going to be called Translation Studies. At a later stage he co-edited with colleagues from different countries and disciplines Translation in the Development of Literatures (1993), Translation and Modernization (1995), Communication, Technologies and Translation in the “Global Village” (1996), Translation Studies in Hungary (1996) and Crosscultural and Linguistic Perspectives on European Open and Distance Learning (1998). He has been a guest professor at universities such as the University of Pennsylvania, New York University, University of Alberta, University of Amsterdam, Sorbonne III, Sorbonne IV, Georg August Universität Göttingen, etc., – having lectured in many others as well. Since 2010-12 he serves a two-year tenure as a guest professor at the Universidade Federal de Santa Catarina in Brazil.

Translation and Globalization. Why, How and Where Translation May be a Key to the Dynamics of Culture
Scroll to top