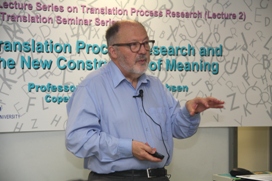 Translation process research (TPR) has been said to be in need of being reembedded in a new conceptual and methodological framework (Muñoz ed. 2016). The main reason for this is that meaning has been found or claimed to be ‘4EA’: embodied, embedded, enacted, extended, and affective. The further claim is that traditional TPR (Jakobsen 2017), using keylogging, eyetracking and retrospective think aloud in lab-oriented experiments, is unable to capture the complexity, concreteness and situatedness of this new construction of meaning. In the new construction, cognition and meaning are not only in our heads, but in our bodies or even in networks (Risku and Windhager 2013). The kind of translation that is done in a lab is artificial and ecologically invalid, it has been claimed. Real translation is best studies in professional translation workplaces (Ehrensberger-Dow et al 2015), and the best method to study translation here is by using anthropological field study methodology.
While much of this criticism carries considerable conviction, there is still much to be said in favour of experimental, process-oriented work. It is not yet clear how field-study methodology will enhance either our understanding of the dependence of human cognition on brain, body, environment, situation and technology, or will reveal how these factors impact on translators’ cognition and decision making.
A case will be made for claiming that translation exists in many places, is equally real in them all, should be studied in them all, and can be relevantly studied with an array of different methodologies.

Arnt Lykke Jakobsen is Professor Emeritus of translation and translation technology at Copenhagen Business School (CBS). He was an assistant/associate professor of English literature at Copenhagen University from 1972-1985, where he developed an interest in translation, centred on the reception of English literature in Denmark. In 1985, after joining CBS, his interest in translation became more oriented towards professional and business communication, and from 1990-1994 he headed a major research project on ‘Translating Specific-Purpose-Language Texts’. A growing interest in translation processes and methods of exploring them led to the first version of his invention of the keylog software program Translog in 1995. Subsequent versions of the program have been a key technology in a wide range of experiments, including two major EU research projects, the Eye-to-IT project (2006-2009) and the CASMACAT project (2011-2014). In 2005 he established CRITT, the CBS Centre for Research and Innovation in Translation and Translation Technology, which he directed until 2014. The main focus of research is on developing and exploiting a methodology for translation process research using keylogging and eyetracking.
He has been President of the European Society for Translation Studies since 2016.