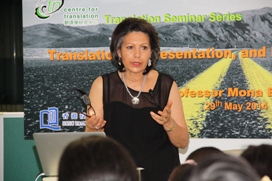 Translation is one of the core practices through which any cultural group constructs representations of another and contests representations of the self. Part of its power stems from the fact that as a genre, it tends to be understood as “merely” reporting on something that is already available in another social space, that something being an independent source text that pre-exists the translation. Using concrete examples of subtitled political commercials and video clips created by both political lobbies and activists, this presentation will attempt to demonstrate that far from being a documentary practice that follows and is subsidiary to an independent source text, translation is imbricated in an ongoing process of (re)constructing the world through narrative performance.