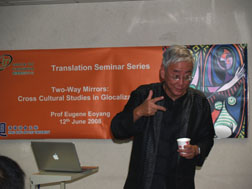 Two-Way Mirrors: Cross-Cultural Studies in Glocalization posits a model of knowledge that stresses the dialectics of knowing, where any view of an object also provides (if one looks for it) a reflection of the subject. All knowing is, in this sense, positional, and deictic: where one is “placed” affects what and how one sees. For translators, this means that the work rendered must embody both the perspective of the source and the target culture. The seminar is an exploration of some of the major themes of Two-Way Mirrors, and outlines a dialectic of the global and local in the phenomenon now familiar as “glocalization,” where a global and a local perspective are synergistically combined.

Eugene Chen EOYANG is Chair Professor of Humanities and Director of General Education at Lingnan University in Hong Kong. He is also Professor Emeritus of Comparative Literature and of East Asian Languages & Cultures at Indiana University in the U. S. He was a co-founder of the journal, Chinese Literature: Essays, Articles, Reviews (CLEAR), and numbers among his publications, The Transparent Eye: Reflections on Translation, Chinese Literature, and Comparative Poetics (Hawaii, 1993); Coat of Many Colors: Reflections on Diversity by a Minority of One (Beacon, 1995); ‘Borrowed Plumage’: Polemical Essays on Translation (Rodopi, 2003); and Two-Way Mirrors: Cross-Cultural Studies on Glocalization (Lexington Books, 2007). His translations have appeared in Sunflower Splendor: Three Thousand Years of Chinese Poetry (Anchor Books, 1975), edited by Irving Lo and Wu-chi Liu, and The Selected Poems of Ai Qing (Foreign Languages Press, Indiana University Press, 1982). He has also published a childrens book, The Smile of a Crocodile: Rhymes for Chloe (and Kyle) (BookSurge, 2008). He has been President of the American Comparative Literature Association (1995-97), a member of the Executive Board of the International Comparative Literature Association (2000-2007), and Vice President, Fédération Internationale des Langues et Littératures Modernes (1999-2005). He was inducted as a Fellow of the Royal Society for the encouragement of the arts, merchandise, and commerce in 2001.