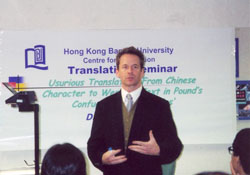 As the great suspect within the relatively recent tradition of modernist Anglo-Chinese translation, Ezra Pound has enjoyed a rather uneven legacy. A wide variety of scholars have lauded his Confucian translations as the products of a remarkable and contingent, if naive, convergence between Imagism and Confucian/Taoist discourses widely available to Western artists after 1910. Still other scholars have used the debunking of Pound’s protean sinology as a strut to support their own particular platform of literary authenticity at any given moment in the on-going, ideological renegotiation between shifting alliances vying for hegemony in the cultural politics of contemporary China. The essay claims that Pound’s process of reading the Chinese character is one of “usurious” translation: namely, his translations of Chinese signs constitute a practice of (mis)reading whereby the poet superimposes his own ideological transitivity onto Chinese signs (the translator’s inherently metaphorical rewriting of source text in terms amenable to his own culture’s frame of reference). A usurious semiotics likewise recasts the debate about the consistency of Pound’s discourse on usury and banking itself (the bête noir defining his artistic production, politics, and ethics before, during, and after the World War Two). I suggest that Pound’s arguably necessary process of reading Chinese signs as Western texts inverts the particular brand of cross-cultural logic he himself used when striving to apply Confucian remedies to Anglo-European ills.

Stuart Christie is an assistant professor in the Department of English Language and Literature at Hong Kong Baptist University where he has taught since 1999. Prior to his arrival in Hong Kong, he held teaching posts at the University of California, Santa Cruz, and Villanova University in Pennsylvania. His recent work on British modernism has appeared in Modern Fiction Studies and the Woolf Studies Annual. He is currently at work on a book-length manuscript analyzing E. M. Forster’s BBC broadcasts.