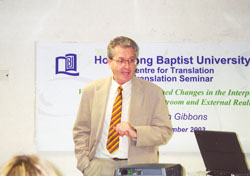 This paper presents the results of a detailed analysis of courtroom transcripts involving Spanish-English interpreting by four interpreters in Sydney, Australia, where consistent changes in the interpreted versions were found.

Dr John Gibbons teaches in the English Department at Hong Kong Baptist University. He has wide and varied experienced of language and law issues, including working with the New South Wales Police on their language procedures. He has worked as an expert witness in more than 30 cases. He has published widely in the field of language in the law, including Language and the Law (Longman, 1994) and Forensic Linguistics (Blackwell ‘Language in Society’ series, 2003), which has a chapter on legal interpreting/translation. He is on the editorial board of the journals Forensic Linguistics, Journal of Multilingual and Multicultural Development, and the International Journal of Applied Linguistics. He is President of the International Association of Forensic Linguists, and convenor of the AILA Scientific Commission on Forensic Linguistics.
He has been involved in translation/interpreting issues for many years, and has helped in the drafting of Australian federal legislation on the right to an interpreter in court, was Chair of the NAATI regional advisory panel, and has taught courses on translation theory.
This paper was the result of collaboration with Sandra Hale to research interpreted courtroom testimony.

Varying Realities: Patterned Changes in the Interpreter’s Representation of Courtroom and External Realities
Scroll to top