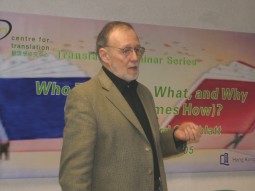 Howard Goldblatt BA, Long Beach State College, 1961; MA, San Francisco State University, 1971; PhD, Indiana University, 1974. Research Professor of Chinese, East Asian Languages and Literatures, University of Notre Dame.
Howard Goldblatt has taught modern Chinese literature and culture for more than a quarter of a century. The foremost translator of modern and contemporary Chinese literature in the West, he has published English translations of more than thirty novels and story collections by writers from China, Taiwan, and Hong Kong. His translation (with Sylvia Li-chun Lin) of Notes of a Desolate Man by the Taiwanese novelist Chu T’ien-wen won the 1999 “Translation of the Year” award given by the American Translators Association. He has also authored and edited half a dozen books on Chinese literature. The founding editor of the scholarly journal Modern Chinese Literature, he serves on the editorial and advisory boards of many scholarly and literary magazines, and has contributed essays and articles to The Washington Post, The Times of London, TIME Magazine, World Literature Today, and The Los Angeles Times, as well as scholarly books and journals.

Who Translates What, and Why (and Sometimes How)?
Scroll to top