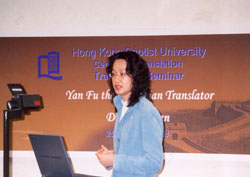 The speaker will discuss her current rereading of the translation project of Yan Fu through a series of metaphor – translation as power conversion, as reformation, as intellectual critique, as narrative and as a cosmological act.

New findings from the field of intellectual history clarify existing inconsistencies and political biases concerning Yan Fu’s persona and translations, especially Tianyanlun, historicizing him as a persistent seeker of the Confucian dao. Close examination of his essays, correspondence and translational remarks suggests that his words and deeds were steeped in Confucian (or classical) poetics, a totally different concept from modern pure literary poetics. This necessitates rereading of his manipulative translations against the Confucian literary tradition that allowed exegetical and eisegetical interpretation of classics and commentaries for narrating the dao and thus marked a higher-level operation of translation as a tool for higher learning than as an occupation. It also allows hermeneutical rereading of his xin-da-ya translation principles in relation to the Confucian exegetical tradition, which frees the study of his principles from the current cul-de-sac and offers a systematic approach to the study of xin, da and ya as core values in Confucian poetics meaning faith, decorum and virtue respectively. This perspective offers a philosophical dimension to translation and valourizes translation as a virtuous act of conduct in the Chinese tradition and as cosmological transference of concepts and images in human’s pursuit of truth and being.

The promotion of the complex notion of translation beyond the word itself to the realm of metaphor facilitates exchange between languages and systems at the level of tertium comparationis and enables reasoning at the level of the universal logos. In the present study of Yan Fu, this helps to avoid recurrent arguments and leads to more balanced and constructive perspectives for the future development of a major research topic in Chinese translation studies. It also opens the possibility of exchange between a traditional theory and modern theories and between the Chinese translation tradition and other traditions.