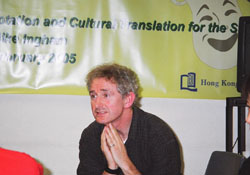 Remember that words are signals, counters. They are not immortal. And it can happen that a civilization can be imprisoned in a linguistic contour, which no longer matches the landscape of fact.
BRIAN FRIEL, Irish playwright – Translations, 1980.

The hermeneutic act – interpreting the source text – consists of delineating several main lines translated into another language, in order to pull the foreign text towards the target culture and language, so as to separate it from its source and origin. Translation does not entail the search for the equivalence of two texts, but rather the appropriation of a source by a target text.
PATRICE PAVIS, French theorist. 1989 essay.

The witty Italian formulation traduttore-traditore (translator-traducer) is an appropriate point of departure for this seminar on cultural adaptation and translation for the stage. As recently as the beginning of the last century a great playwright like Chekhov could express profound scepticism about the ability of the literary translator to translate the cultural specificities of his plays into a language other than Russian. Posterity has witnessed many famous and critically acclaimed non-Russian productions of his masterpieces, often translated-adapted by gifted creative dramatists of the day. This process of creative transformation, is, as the seminar will argue and illustrate with pertinent examples, quintessential. The creative adaptation-translation team (and the written text translator is but one member of a team that includes other cultural translators such as actors and directors) must seek to traduce in order to translate, perverse as that may seem. Without the creative act of transforming a source text for a target audience in a way that addresses the cultural commonalities of the performers and audience and the cultural, and possibly allegorical, relevance of the source drama text to that audience, a literal and faithful translation is likely to be pedestrian, or to use Peter Brook’s term ‘deadly’.

Raymond Williams’ useful term ‘structure of feeling’ referring to the fusion of the dramatic tradition (structure) with innovative, hermeneutically fresh and contemporary codes of meaning (feeling) will theoretically underpin this argument, which is very much in line with the views of more progressive cultural critics from Nietzche to Patrice Pavis (see quote above) that ‘pulling the source text towards the target audience in the theatre is both necessary and desirable’. The process is both synchronic and diachronic, interlingual and intercultural and intra-lingual and intra-cultural. Examples of cultural adaptations in the international context and the Hong Kong context – in particular the speaker’s experience of directing such adaptations as student productions and as local community productions – will support the theoretical argument of the seminar. The audience will be invited to participate in a short discussion about the speaker’s ideas for transforming Brian Friel’s play Translations into a Hong Kong-specific production in 2006-7.

Mike Ingham has B.A and Masters degrees in European Literature and Linguistics from the University of Oxford and a Ph.D. in English Drama and Literature from the University of Hong Kong. He has been teaching English Studies as a member of the English Department at Lingnan University since 1999. Previously he worked for the Hong Kong Education Dept. at the Institute of Language in Education and subsequently the Hong Kong Institute of Education, as well as teaching on the first M.A. in East-West Theatre Studies in Hong Kong. Mike taught in England, France, Italy and Spain before coming to Hong Kong in 1989. His professional life started as a teacher of French and German language and literature in his early career in Britain, and then Media and Communications in London from 1995-6, but he returned to Hong Kong in autumn 1996. Speech development, literature and drama in education are Mike’s areas of professional expertise. He is interested in many aspects of performing, particularly drama, poetry and music. Mike is a founder member of Theatre Action, a Hong Kong based drama group that specialises in action research on more literary drama texts. Mike directs student productions in English at Lingnan University as part of the university’s liberal arts mission.
Theatre Action’s productions to date are Metamorphosis by Steven Berkoff at the Hong Kong Fringe Club in 1997 and a multi-lingual production of Baal for the Brecht Centenary Festival and conference in Beijing in 1998. He is also a founding member of Queens’ Caf Company and acted in several productions at the Hong Kong Fringe Club, and also participated in a number of Hong Kong Players productions. Other recent productions he has directed/translated in Hong Kong include No Exit and Abigail’s Party at the Hong Kong Fringe Club and an adaptation in English and Chinese of the novella, The Yellow Wallpaper at the Arts Centre in April of this year. Mike was involved as producer and actor in the QCC/Theatre Action joint productions of Shakespeare’s Hamlet and Tempest, which took place at the Fringe Club over a two-week period in November 2002. In May of 2003 he was the director of a critically acclaimed production of David Mamet’s Sexual Perversity in Chicago again at the Hong Kong Fringe Club and directed a new production of Hamlet at Hong Kong Arts Centre in April 2004, to raise money for a cross-border charity project for girls education in south-west China.
Recent publications are City Voices–An anthology of Hong Kong writing in English (HKU Press, 2003) and Staging Fictions – The prose fiction stage adaptation as social allegory (Edwin Mellen Press, 2004).