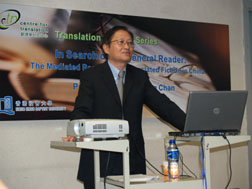 History-writing has received a great boost in Translation Studies research in the past decade. However, for many translation histories, reception is conceived largely in terms of how a translator reads a foreign text, not how the ordinary reader “receives” the products of translation. The sidelining of the reader is evident from a cursory look at the histories of translated modern English fiction in China. As things stand, we are more knowledgeable about: (a) official attitudes concerning what is publishable, (b) publishers’ views on what is commercially viable, and (c) literary scholars’ judgments on the value of specific translations. Where is the general – as opposed to the special – reader? No history of translation reception can be written without a consideration of the phalanx of ideological determinations in the background; it is crucial that the reader is not only textually constructed (as the “implied” reader), but also situated in relation to extra-textual, circumstantial reality (as the “actual” reader). With reference to Robert Darnton’s concept of “the communication circuit”, the present paper discusses the translation reader as a crucial link in the network of circuits in which writers, publishers, printers, distributors, and reviewers all participate because of their involvement in the production, promotion and proliferation of translated fiction. An analysis of representative British novelists in Chinese translation – from John Galsworthy to Agatha Christie to D.H. Lawrence – reveals the extent to which reader reception can be said to have been heavily mediated, for it was embedded in the power structures that governed the importation of foreign literary works into China through much of the twentieth century.

Leo Tak-hung CHAN is Professor of Translation and former Head of the Department of Translation, Lingnan University. He began his career as Assistant Inspector of Schools in Hong Kong in the 1980s, and later taught at the City Polytechnic of Hong Kong, Indiana University, Georgetown University and the University of Maryland. In 1991-92 he was awarded a Postdoctoral Fellowship to undertake sinological research at the Center for Chinese Studies, University of Michigan, His articles have appeared in journals in the United States, Europe, Canada, Japan, Taiwan and Hong Kong, including Harvard Journal of Asiatic Studies, Translation Studies in the New Millennium, Perspectives, Comparative Literature Studies, TTR, The Translator, Babel, META, Across Languages and Cultures, Quaderns: Revista de Traduccio, Journal of Oriental Studies, Linguistica Antverpiensia and Asian Folklore Studies. Among the scholarly works he has published are: The Discourse on Foxes and Ghosts (University of Hawaii Press, 1998), Masterpieces in Western Translation Theory (co-edited; City University of HK Press, 2000), One into Many: Translation and the Dissemination of Classical Chinese Literature (edited; Rodopi Editions, 2003) and Twentieth-Century Chinese Translation Theory: Modes, Issues and Debates (John Benjamins, 2004). He is Founding Editor (1997-2002) of Journal of Modern Literature in Chinese; Executive Council Member of the Translators’ Association of China; Advisory Board Member of TTR; Chief Editor of Translation Quarterly; Editorial Board Member of Chinese Literature and Cultural Studies and Journal of Sinological Research; Vice-President of the Hong Kong Translation Society; First Vice-President of the Asian Studies Association of Hong Kong; and Chief Moderator of the FDEC (Translation) Examinations of the Institute of Linguists, United Kingdom (2000-2004).

In Search of the General Reader: The Mediated Reception of Translated Fiction in China
Scroll to top