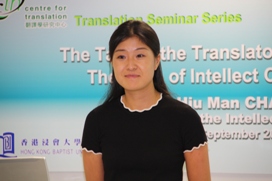 This seminar will focus on a central argument on the task of the translator as a diplomat, by drawing upon my ongoing experience as the series editor and chief translator of the Intellect China Library, a book series that publishes English translation of the latest Chinese scholarship of art and culture. The talk will share the theoretical and practical difficulties that the series has been facing since its launch in 2015, as well as the solutions that it has experimented to tackle these issues. It will use one of the most commonly published research subject in the series – film studies – to further demonstrate the problematics in cross-cultural scholarly communication. Based on this specific case study, it will finally propose an ethos that I as a translator, editor and researcher believe in, which is the important task of a translator being an intellectual diplomat and peace keeper.

Hiu Man Chan is Series Editor of the Intellect China Library (Intellect, UK). Apart from this editorial role, she is also a researcher. Her research specialism includes international film collaboration (production, distribution & exhibition), creative industries, cultural policy and critical history of film criticism. Outside of academia, she is an active media commentator, a filmmaker and film curator.

The Task of the Translator as a Diplomat: The Case of Intellect China Library
Scroll to top