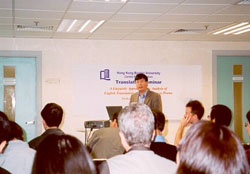 The aim of the talk is to show how a linguistic approach can contribute to the study and analysis of translated texts. The talk will begin with some basic ideas in functional linguistics, which will be needed in later discussions. The examples to be illustrated are English translations of ancient Chinese poems (e.g. Tang poems). The approach proposed is different from those that exist in the translation literature to date. It is hoped that a linguistic analysis will give implications to translation studies.

Professor Huang Guowen, Dean of the School of Foreign Languages, Sun Yat-sen University, Guangzhou, received his first PhD in Applied Linguistics (Edinburgh, UK) in 1992 and his second PhD in Functional Linguistics (Wales, UK) in 1996. His main research areas are Systemic Functional Linguistics, Discourse Analysis, and Translation Studies. His papers are in journals such as Language Sciences, World Englishes, Interface (Journal of Applied Linguistics). He has published/edited a number of monographs/collections, including Meaning and Form: Systemic Functional Interpretations (Studies for M.A.K. Halliday), Norwood: Ablex, 1996. He is a member of editorial/advisory boards of several journals, including Social Semiotics (Harfax, England).