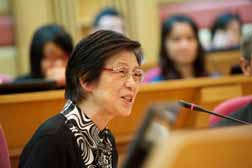 Having graduated from a postgraduate course at the English Department of Beijing Foreign Studies University in 1965, Shi Yanhua began to work in the Ministry of Foreign Affairs of China. Between 1971 and 1975, she stationed at the UN headquarters to interpret and translate for China’s permanent representative and deputy permanent representative. During 1975-1985, she was the interpreter for top leaders in China, including Deng Xiaoping, Hu Yaobang, and Li Xiannian, and received a number of top U.S. leaders including President Richard Nixon and Henry Kissinger. During this period, Shi also participated in a number of important diplomatic negotiations such as the China-US negotiation on the establishment of diplomatic relations, the negotiations on the China-US joint statement on US arms sales to Taiwan, and negotiations with other countries in the process of establishing diplomatic relations. During 1985-1988, she was the permanent counselor at China’s mission to the UN and was in charge of handling part of the agenda items in the UN Security Council as well as issues raised in the UN General Assembly relating to Cambodia, Afghanistan and non-colonization.

During 1989-1990, Shi was political counsel at China’s embassy in Belgium and its mission to the European Community in Brussels. She then served as the Director-General of the Department of Translation and Interpretation in the Ministry of Foreign Affairs of China between 1991-1994 before serving as China’s Ambassador to Luxemburg during 1994-1998. During 1998-2000, she became minister counselor at the China’s Embassy in France.

Witness to History
Scroll to top