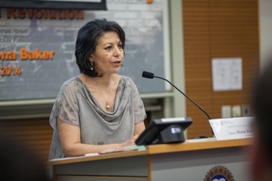 The idea of prefiguration originally derived from anarchist discourse; it involves experimenting with currently available means in such a way that they come to mirror or actualize the political ideals that inform a movement, thus collapsing the traditional distinction between means and ends. Practically all the literature on prefiguration has so far focused on structural, organizational and interactional issues. Existing literature has examined how activist communities attempt to create in their own interactions and in the way they organize their work the kind of society they envision: non-hierarchical, non-representational, respectful of diversity, etc. This lecture will explore the extent to which volunteer subtitling undertaken by disparate individuals for collectives connected with the Egyptian Revolution supports or undermines the prefigurative agendas of these collectives. In doing so, I will attempt to extend the current definition of prefiguration to encompass textual, visual and aesthetic practices that prefigure activist principles and actualize them in the present, focusing on the level of experimentation involved in subtitling video clips produced by two Egyptian collectives: Mosireen (http://www.youtube.com/user/Mosireen) and Words of Women from the Egyptian Revolution (http://www.youtube.com/channel/UCoJMzdw8wTSR5NY3zENZCmg).