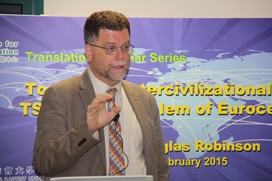 Charges of Eurocentrism have been troubling the TS scholarly community lately, leading recently to a prominent countercharge in the pages of Translation Studies from Andrew Chesterman, who argues that science is always universalist, and that cultural relativists who accuse scholars like him of Eurocentrism are therefore simply wrong. This paper will offer a new way of thinking about Eurocentrism (or for that matter Sinocentrism, or any -centrism) based on the theoretical framework developed by the Japanese theorist Sakai Naoki around “cofigurative regimes of translation.” If Orientalism and its backlash Occidentalism are cofigurative–developed in relationships of unequal power–they aren’t “centered” in Europe or Asia or anywhere else, but globally networked. I will argue that the new voices emerging around this idea might be thought of as developing an “intercivilizational turn” in TS.

Professor Robinson is a critical theorist whose “somatic” and “performative” theories of communication have broken new ground in literary studies, linguistics and translation studies. He has an impressive publication record which includes more than 20 monographs and 5 textbooks as well as articles in refereed journals and translation work from Finnish, German and Russian; he has been cited over 2700 times.

Toward an Intercivilizational Turn: TS and the Problem of Eurocentrism
Scroll to top