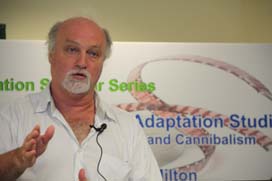 Adaptation Studies have become very popular in recent years in many university departments, especially those of English Literature and Film Studies, with a growing number of books, conferences and journals in the area. This talk begins by examining the interface (or lack of interface) between Translation Studies and Adaptation Studies, also introducing the concept of appropriation, and examples will be given from adaptations and appropriations of the works of William Shakespeare, particularly Othello. The talk then introduces the ideas of the Brazilian translation poet, translator and translation theorist, Haroldo de Campos (1929-2003), especially his notion of recreation and his use of the Brazilian modernist concept of anthropophagy.

John Milton is Associate Professor of English Literature and Translation Studies at the University of São Paulo in Brazil. His main interests are the History, Sociology and Politics of Translation and has also recently been working with Adaptation Studies. Amongst his publications are Agents of Translation, (John Benjamins), which he edited together with Paul Bandia.