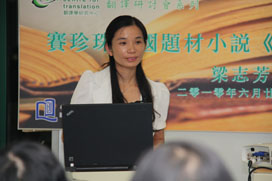 American writer Pearl S. Buck (1892-1973) is a significant figure in 20th century Sino-American interaction. Buck was “mentally bifocal”. Her nearly forty-year stay in China and the second half of her life back in America, put her in a unique position in Sino-American conflict. Buck’s masterpiece, The Good Earth describes family life in Chinese village in early 20th century. The novel was one of the most influential western books on China in 1930s and it was also an influential factor in Buck winning the Nobel Prize for Literature in 1938. This presentation is part of the author’s PhD dissertation. The present study takes the Imagological approach to address how Chinese translations of The Good Earth have re-presented the image of China depicted by Pearl Buck, and how this re-presented image of China has helped to construct Chinese national identity of the translators and their target readers. In the analysis, the author will mainly take ideas of how images can be used to construct national identities from Imagology and what crucial role translation could play in the formation of national identity from Translation Studies.