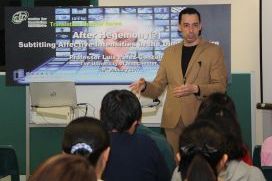 Disciplinary discourses at the interface between translation studies and activism have been traditionally dominated by ‘structuralist’ perspectives (Pérez-González 2010). Activist translation has therefore tended to be conceptualised as a set of counter-hegemonic practices of mediation invariably associated with written texts, and undertaken by aggrieved constituencies clustered around essentialist categories of identity politics. But the advent of digital culture has brought about a re-politicisation of the dialectic between hegemony and resistance which has led ‘to an increased interest in personal self-expression of citizens as a political act’ (Kaun et al. 2016: 1). This presentation explores how agencies of audiovisual translation activism in the digital culture are being reconfigured as networked, participatory sites of intervention where ordinary people engage in complex negotiations of cultural identity and citizenship. Drawing on Beasley-Murray’s (2010) theorisation of posthegemony, I argue that such forms of activism typify the ongoing shift from representative to deliberative models of public participation in neoliberal societies where the dissolution of the state has resulted in a diffuse ubiquity of politics. Examples will be offered to demonstrate some of the ways in which affective intensities – rather than transcendent notions of ideological representation – are providing the impetus for the proliferation of such digital activist formations. In light of these developments, structuralist perpectives on translation activism are bound to be gradually superseded by ‘generative’ approaches, where the role of agency is foregrounded against that of structures.

Luis Pérez-González is Professor of Translation Studies and Co-director of the Centre for Translation and Intercultural Studies at the University of Manchester, UK. He is a Co-investigator on the 4-year project Genealogies of Knowledge: The Evolution and Contestation of Concepts across Time and Space, and a research associate in the Manchester-led OWRI project Cross-language Dynamics: Reshaping Community – both of them funded by the Arts and Humanities Research Council in the UK. He is also author of Audiovisual Translation: Theories, Methods and Issues (Routledge 2014), editor of Routledge Handbook of Audiovisual Translation (2017), and co-editor of Routledge’s Critical Perspectives on Citizen Media book series. His articles have appeared in a wide range of international journals, including The Translator, The Journal of Language and Politics, Convergence: The International Journal of Research into New Media, International Journal of Cultural Studies, Journal of Pragmatics and Language and Intercultural Communication.

After Hegemony(?) Subtitling Affective Intensities in the Digital Culture
Scroll to top