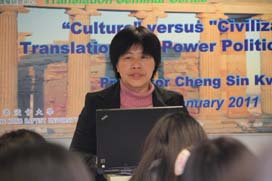 By the nineteenth century, “culture” and “civilization” had been translated into different languages in Europe and beyond, and both came to be regarded in the West as “international” concepts. A careful study of the translation history of these two terms, however, would reveal that European internationalism was not only deeply implicated in colonialism, but also heavily fraught with nationalism inside Europe. This seminar will trace the splitting of a European identity into different national identities by concentrating on the translation history of the two terms “civilization” and “culture” in relation to European power politics, focusing in particular on Germany, France, and Britain.
Please note that the captioned lecture will draw upon Part I of a much longer manuscript entitled “Translations of ‘Culture’ and ‘Civilization,’ European Power Politics, and China’s Response to Colonial Challenges since the Opium Wars.” One objective of the project is to demonstrate the important role of translation for international relations, politics, world history, and anthropology. I will deepen the complexity of the relationships among translation, nationalism, and internationalism discussed in Part I by considering in Part II an alternative understanding of these three concepts in the context of China’s response to colonial challenges. Drawing insight from Koselleck’s Begriffsgeschichte approach, I will pay special attention to the semantic changes in the two terms “wenming” and “wenhua” as a result of China’s attempts to effect a translation imperii in reverse via a translatio studii.

Sinkwan Cheng is the editor of Law, Justice, and Power: Between Reason and Will (Stanford University Press). The volume consists primarily of fresh contributions from Julia Kristeva, Slavoj Žižek, J. Hillis Miller, Alain Badiou, Nancy Fraser, and Ernesto Laclau. Prior to joining the Translation Department at the Chinese University of Hong Kong, Professor Cheng was an Associate Professor of British Literature in New York. She also had experience teaching European intellectual history in Berlin (specializing in Continental philosophy and political history.)
Professor Cheng has given faculty seminars and lectures in England, Germany, the United States (including Columbia University), South Korea, China, and Hong Kong. In addition to her Stanford volume, she has published in MLN, Cardozo Law Review, American Journal of Semiotics, Law and Literature, and Literature and Psychology. Along with Fredric Jameson, Russell Grigg, and Parveen Adams, she served on the Advisory Board of American-Lacanian-Link.
Professor Cheng was the recipient of an Excellence in Teaching Award in a campus-wide competition at SUNY Buffalo. During the past decade, she has been awarded four prestigious fellowships and grants for her scholarly work (including a Rockefeller Fellowship and a DAAD Fellowship.)

“Culture” versus “Civilization”: Translation and Power Politics in Europe
Scroll to top