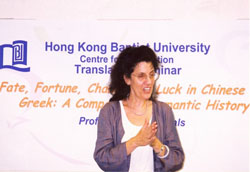 In this paper I survey the semantic fields and root metaphors of “fate” in Classical Greece and pre-Buddhist China. The Chinese material focuses on the Warring States, Han, and the reinvention of the earlier lexicon in contemporary Chinese terms. The Greek study focuses on Homer, Parmenides, the problem of fate and necessity, Platonic daimons, and the “On Fate” topos in Hellenistic Greece. The study ends with a brief comparative metaphorology, of metaphors for the action of fate included command, division or allotment, and wheel or cycles of change.

Professor Lisa Raphals received her PhD from University of Chicago and is currently Professor of Comparative Literature at the University of California, Riverside. Her research interest lies in East-West comparative studies, Chinese, Greek, comparative philosophy and history of science. She is the author of Knowing Words: Wisdom and Cunning in the Classical Traditions of China and Greece, Sharing the Light and Representations of Women and Virtue in Early China, and a range of studies in comparative philosophy and early Taoism. She is now a Visiting Fellow at Centre for Cross-Cultural Studies, City University of Hong Kong.

Fate, Fortune, Chance and Luck in Chinese and Greek: A Comparative Semantic History
Scroll to top